This article is to communicate that FMSBC has returned to the church building for "in-person" worship. We understand that in-person worship is a personal decision that each individual must make for themselves, and we fully respect the decision of those whom are not yet ready for this level of worship. That said, we will continue to provide Teleconference and Facebook worship services on the virtual platform that we have utilized over the past.

Upon returning to in-person service all worshippers will be required to wear a mask at all times while inside the church building, if you do not have a mask one will be provided for you. A temperature check will be performed on each worshipper at the church entrance to ensure they are not measuring a temperature of 100.4 degrees F or higher. All worshippers will be required to sign-in at the attendance station and provide pertinent information upon entrance. Social distancing (minimum 6-feet) will be observed inside the church. We ask that you please bring your bible as all bibles and hymnals have been removed from the pews in order to eliminate high touch points. We ask that you please follow the instructions of the ushers and obey the posted signs at all times to assist us in keeping each other safe.

While we prayerfully look forward to worshipping with each of you again in-person, “We will see you at First Morning Star when you are comfortable being in-person.” We ask for your prayers as we go forward and continue to Praise God From Whom All Blessing Flow.

Our founding fathers began their search for the truth and eternal salvation, during the time of their human bondage, by worshipping Our Lord and Saviour, Jesus Christ, in the gallery of Union Baptist Church (Achilles).

Three years after the Civil War, on Saturday, July 11, 1868, Union Baptist Church, presented to their approximately 200 African-American members, a “letter of dismissal” and authorized them to organize a church of their own. The church was named “Morning Star Colored Baptist Church” and a former sawmill was the first worship structure.

In 1904, the church family built their first permanent sanctuary and it was located a quarter of a mile down the road from Union, the “mother church”. Our early church motto was “Let us continue in the faith; God has been good to us and brought us out of the dark days of slavery and made us free men.”

Over 100 years later, we still worship in that first permanent building. But, many changes have taken place. The original building was modernized; and enlarged externally and internally several times.

“We Serve by Faith in Our Savior, Yesterday, Today, Tomorrow and Forever”.


How To Become A Member 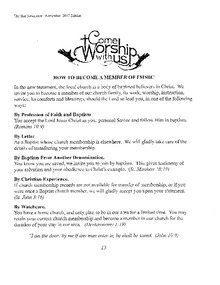 We are affiliated with the Gloucester Union Relief of Missionary Baptists. Click here to learn more.

To learn more about the Woodville Rosenwald School Foundation, which was created to preserve the education al history of Gloucester's African American community, click here

We're so glad that you've taken time to visit our website and hope you'll take the next step and become personally acquainted with our church family. We invite you to visit us at 8906 Guinea Rd P.O. Box 159, Bena, VA and consider attending a worship service. If you have any questions or need help in any way, please feel free to contact us through E-mail or our contact form. You can also call us at: 804-642-2390. We look forward to seeing you soon.